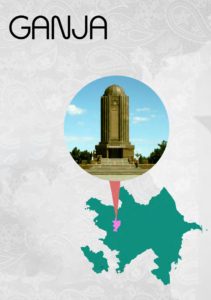 Ganja is the second largest city in the Republic of Azerbaijan. It is located on the Ganja-Kazakh lowland at the northeastern foot of the Lesser Caucasus, on the Ganjachai River (Kura basin). Today, the ancient city of Ganja is a very attractive destination for tourists and it attracts travelers from all over the world. In addition, the city is also famous for participating in a project to restore the trade route of the Great Silk Road. Wine-making is also very popular in Ganja. For example, Ganja – Sharab – is a wine brand that is famous for its rich taste and takes pride of place in the list of the best vintage wines in Azerbaijan. Göy Göl (Blue lake ) and Maralgöl lakes are the pearls of the city of Ganja. GöyGöl, a beautiful mountain lake surrounded by forests on all sides, is famous not only for its unique landscapes, but also for the healing air, especially useful for people suffering from respiratory diseases. A special type of trout is found in the lake – GöyGöl. This is also a great place for sport fishing. 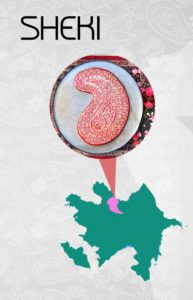 The city of Sheki is located 380 km west of Baku, near the Georgian border. Sheki is located in a picturesque mountain area, indented by narrow gorges and green valleys, with many pristine rivers, waterfalls and mineral springs, framed by dense forests and alpine meadows. The city has many historical and architectural sights, but the pride of ancient Sheki is the majestic Royal Palace of Sheki Khans, built in the XVIII century without a single nail with luxurious wall paintings and openwork windows in a stone citadel. It is no coincidence that many tourist guides call Sheki the gastronomic capital of Azerbaijan. This ancient land is the birthplace of the famous melting in the mouth of baklava and fragrant piti soup

Gakh region is located in the north-west of Azerbaijan, which borders with Georgia. Gakh is considered to be one of the oldest regions in Azerbaijan and from time immemorial Azerbaijani tribes had lived there , mainly engaged in plant growing, animal husbandry and also handicraft. There is a state reserve   located on the territory of Gakh district with the area – 9.2 thousand hectares, called Ilisu State Reserve. More than 300 species of plants grow there, among which there are also medicinal ones. And for those who like fishing, there are wonderful places in the Ganyg-Airichay valley. The defensive fortress in Gakh, called the “Sumu Gala”, dating back to the XVII-XVIII centuries, is located on the left bank of the river Kurmuck. This fortress is known to millions of people through the 1981 film ” Don’t Be Afraid, I Am Here For You!” The famous final battle scene was filmed there. 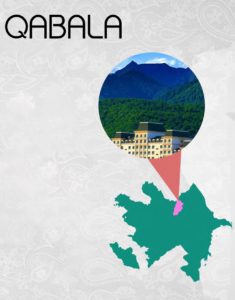 Gabala is located in the foothills of the Greater Caucasus, in the gorge of the Bazar-Yurt and Tufan mountains. Tourists here will find everything they look for a perfect vacation. The mountainous air is intoxicating, beautiful rivers, waterfalls and lakes delight the eyes. For that reason, Gabala is often called “Azerbaijani Switzerland”. Gabala offers travelers to visit their many historical and cultural monuments: the Albanian church of the 4th – 8th centuries .; Feast Komrad, which is located on top of Mount Komrad; the tombs of Sheikh Badraddin and Sheikh Mansurav in the Khazra village , the local history museum, the folk theater and others. Not far from the city of Gabala, in a place called Vandam, in the mountains there is one of the most beautiful places in Azerbaijan – the Seven Beauties Waterfall. It was named Seven beauties because of its consistence of seven cascades with different heights. In the village of Vandam, in the Gabala region, the is a market that has been operating for 20 years, in which, instead of weights, the unit of measure is a bucket – the people call it “The bucket market”. 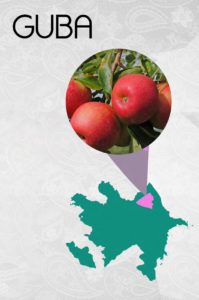 Guba is located in the northeast of the Shahdag Mountains of the Greater Caucasus, at an altitude of more than 600 m above sea level, not far from the coast of the Gudial River. There is a place called Qechresh, which is very popular with the visitors. Here, tourists can walk in the shady forest, visit the Tengealtyn Gorge and famous Afurdzhinsky waterfall, which is registered in the list of Natural Monuments of Azerbaijan. About an hour drive from Guba region, on the northern slope of the Greater Caucasus Mountains, at an altitude of 2100-2200 m. above sea level, there is an ancient settlement called Khinalig that accounts its existence 5 thousand years. For centuries this village has been cut off from civilization by inaccessible mountains with dangerous rocky cliffs. Because of this isolation, its inhabitants have managed to preserve to this day a unique language that does not belong to any language group, and no traditions and customs that occur anywhere else. 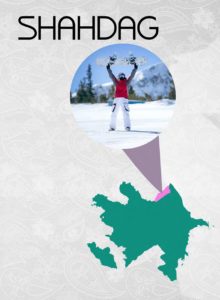 Gusar district is located in the north-east of Azerbaijan and borders with Dagestan. The administrative center of the district is the city of Gusar. Gusar district is one of the most popular places for the tourists in Azerbaijan, and not only because of the Shahdag ski resort operating here. Azerbaijan’s highest point, Mount Bazarduzu (4,466 m) , the highland camp site of the country “Suvar” and the country’s largest carpet weaving machine, behind which 10 people can simultaneously fit are all based in Gusar.  95% of the population of the Gusar region are Lezgins (national minority).

Nakhchivan is a city in the Republic of Azerbaijan, the capital of the Nakhchivan Autonomous Republic. The city is located on the right bank of the Nakhchivanchay River, right on the border with Iran. It is the oldest city in Azerbaijan, originated in the VI. BC. as one of the cities of Caucasian Albania, in the XI century became the capital of the Seljuk State. The main attractions of the city are monuments of medieval architecture: the mausoleums of Yusuf ibn Kuseyir (XI century) and Momina Khatun (XII century), Gyaur-Kala fortress (II millennium BC), as well as the unique Khudaferin bridges. Near the city of Nakhchivan there is a large cave, popularly known as Ashabi-Kahf. Ziyarat Ashabi-Kahf in Nakhchivan is a place mentioned in the Koran and revered by Muslims. The mausoleum of the prophet Noah is one of the main shrines of Nakhchivan. According to the legend, the ark of the prophet Noah anchored near the foot of Mount Gapydzhik in the territory of Nakhchivan .